This post talks about a key factor to CUDA kernel performace: accessing data in the globle memory.

CUDA applications tend to process a massive amount of data from the global memory within a short period of time.

Tiling techniques are engineered that utilize shared memories to reduce the total amount of data that must be acessed from the global memory (read about tiling techniques here The CUDA Parallel Programming Model - 6.Tiling).

In this post I’d like to introduce memory coalescing techniques that can more effectively move data from the global memory into shared memories and registers.

The global memory of a CUDA device is implemented with DRAMs.

Data bits are stored in DRAM cells that are small capacitors, where the presence or absence of a tiny amount of electrical charge distinguishes between 0 and 1.

Reading data from a DRAM cell requires the small capacitor to use its tiny electrical charge to drive a highly capacitive line leading to a sensor and set off its detection mechanism that determines whether a sufficient amount of charge is present in the capacitor to qualify as a “1”. This process takes 10 s of nanoseconds in modern DRAM chips. This is in sharp contrast with the sub-nanosecond clock cycle time of modern computing devices.

Because this is a very slow process relative to the desired data access speed (sub-nanosecond access per byte), modern DRAMs use parallelism to increase their rate of data access, commonly referred to as memory access throughput.

Each time a DRAM location is accessed, a range of consecutive locations that includes the requested location are actually accessed.

Many sensors are provided in each DRAM chip and they work in parallel, each senses the content of a bit within these consecutive locations.

If an application makes focused use of data from these bursts, the DRAMs can supply the data at a much higher rate than if a truly random sequence of locations were accessed.

Recall from The CUDA Parallel Programming Model - 2. Warps that multidimensional array elements in CUDA are placed into the linearized addressed memory space according to the row-major convention.

Say we have a kernel that computes M x N, where both M and N are 2D row-major array.

IMPORTANT: hope this helps with understanding the patterns below

Coalesce happens amongst threads, not amongst different iterations of the loop within each thread’s execution.

You might be thinking: for matrix M in the example below, each thread will read the whole row within its for-loop. But it’s not how the coalesce hardware works here.

Since all threads within a warp executes the same instruction, they all execute the same iteration in the loop at any time. So it doesn’t matter if a thread reads through an entire row during its lifetime. What matters is that all the threads of a warp can be coalesced during each (collected) memory access.

If the above doesn’t make sense to you 🧐, read the post on the matrix application kernel here: CUDA Programming Examples - 1. Matrix Multiplication 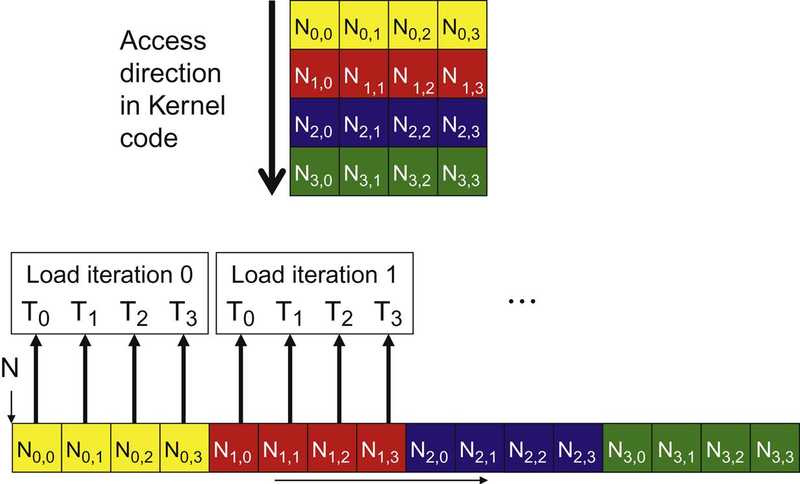 Recall the for-loop in the kernel:

In the pictured example, we are using only 1 block to calculate the entire P matrix, where: 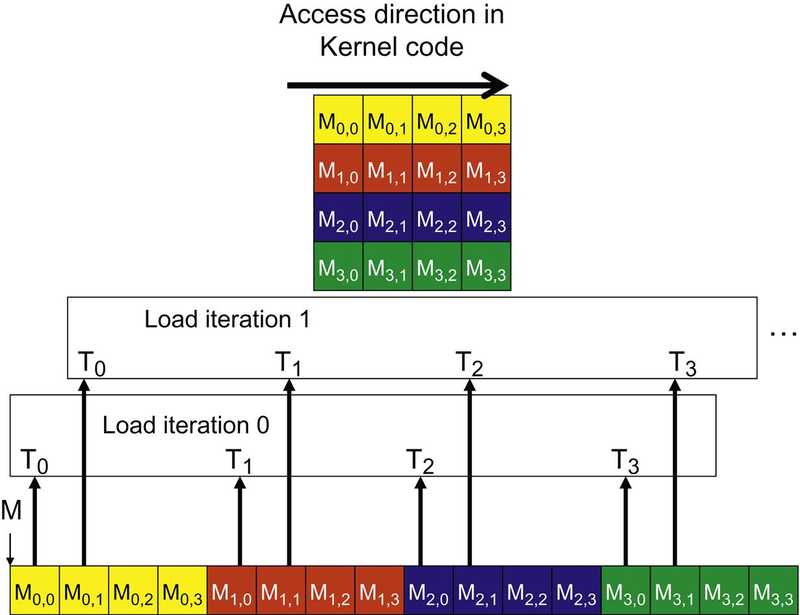 When accessing words of size 1, 2, 4, 8, or 16 bytes and are aligned, compiler translates this to 1 global memory instruction.

But if size and alignment requirements are not met, compiler would translate it to multiple global memory access instructions.

What if we have to iterate through data along the row direction?