There’s an intrinsic tradeoff in the use of device memories in CUDA: the global memory is large but slow, whereas the shared memory is small but fast.

(To recap on the memory hierarchy: The CUDA Parallel Programming Model - 1. Concepts, on how to specify memories for variables: CUDA Programming - 2. CUDA Variable Type Qualifiers.)

A common strategy to reduce memory traffic is to partition the data into subsets called tiles so that each tile fits into the shared memory. Tiling can also come in handy when the data is too big that to fit in the global memory. An important criterion is that kernel computation on these tiles can be performed independently of each other. Note that not all data structures can be partitioned into tiles given an arbitrary kernel function.

The term “tile” draws on the analogy that a large wall (i.e., the global memory data) can be covered by tiles (i.e., subsets that each can fit into the shared memory).

To illustrate the concept of tiling, we use the example from CUDA Programming - 1. Matrix Multiplication, assumes that we use four 2×2 blocks to compute the P matrix. The picture below highlights the computation performed by the four threads of block(0,0): 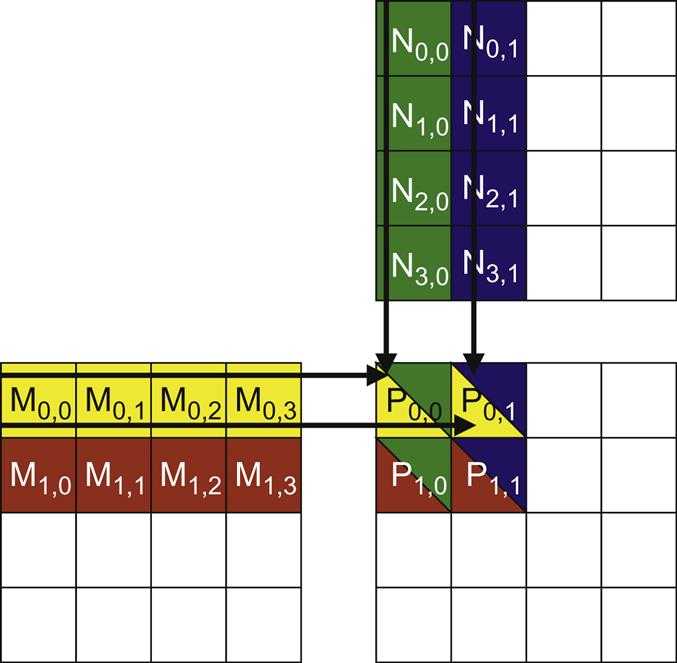 Another picture (below) is used to show the global memory accesses performed by block(0, 0). Among the four threads highlighted, a significant overlap occurs in the M and N elements they access.

threads and their DRAM accesses

Tiled algorithms are highly similar to carpooling arrangements. We can consider threads accessing data values as commuters and DRAM access requests as vehicles.

When the rate of DRAM requests exceeds the provisioned access bandwidth of the DRAM system, traffic congestion arises and the arithmetic units become idle.

If multiple threads access data from the same DRAM location, they can potentially form a “carpool” and combine their accesses into one DRAM request.

However, this process requires a similar execution schedule for the threads so that their data accesses can be combined.

This scenario is shown in the picture below: 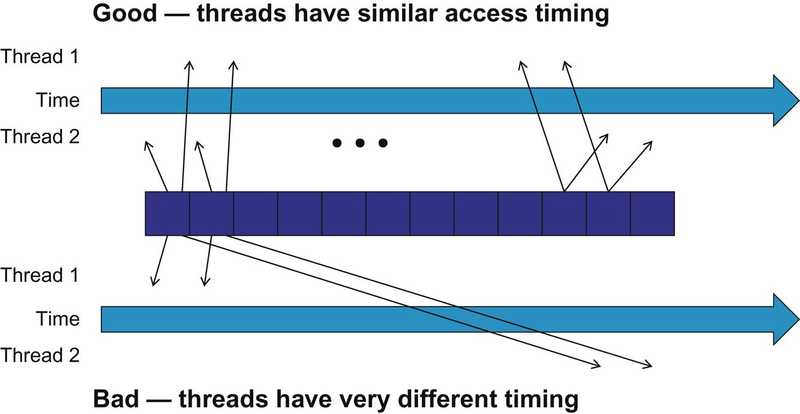 tiling as a parallel algorithm

In the context of parallel computing, tiling is a program transformation technique that localizes the memory locations accessed among threads and the timing of their accesses.

It divides the long access sequences of each thread into phases and uses barrier synchronization to keep the timing of accesses to each section at close intervals.

This technique controls the amount of on-chip memory required by localizing the accesses both in time and in space. In terms of our carpool analogy, we force the threads that form the “carpool” group to follow approximately the same execution timing.

A tiled matrix multiplication algorithm is shown in the picture below: 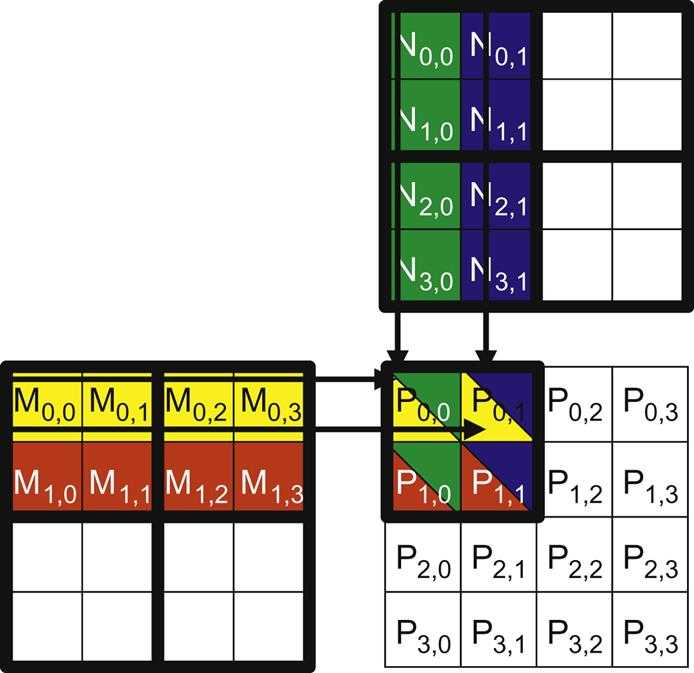 In the picture above, we divide M and N into 2 ×2 tiles. The dot product calculations performed by each thread are now divided into phases. 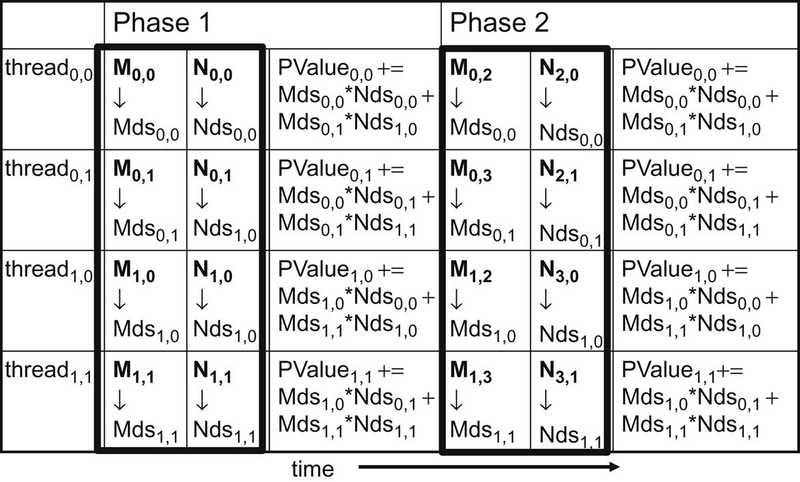 Each row in this picture shows the execution activities of a thread. Only the activities of threads in block(0,0) are shown here but all of the other blocks have the same behavior.

At the beginning of Phase 1, the four threads of block(0,0) collaboratively load a tile of M into a shared memory:

After the two tiles of M and N are loaded into the shared memory, these elements are used in the calculation of the dot product.

By loading each global memory value into the shared memory so that it can be used multiple times, we reduce the number of accesses to the global memory; in this case, we reduce it by half. The reader should verify that the reduction occurs by a factor of N if the tiles are N×N elements.

Note that the calculation of each dot product is now performed in two phases. In each phase, the products of two pairs of the input matrix elements are accumulated into the Pvalue variable. Pvalue is an automatic variable; a private version is generated for each thread. We added subscripts to indicate different instances of the Pvalue variable created for each thread.

In general, if an input matrix is of the dimension Width and the tile size is referred to as TILEWIDTH, the dot product would be performed in Width/TILEWIDTH phases. The creation of these phases is key to the reduction of accesses to the global memory. With each phase focusing on a small subset of the input matrix values, the threads can collaboratively load the subset into the shared memory and use the values in the shared memory to satisfy their overlapping input demands in the phase.

Note also that Mds and Nds are reused to hold the input values. In each phase, the same Mds and Nds are used to hold the subset of M and N elements in the phase, thereby allowing a much smaller shared memory to serve most of the accesses to global memory. This is due to the fact that each phase focuses on a small subset of the input matrix elements. Such focused access behavior is called locality. When an algorithm exhibits locality, an opportunity arises to use small, high-speed memories in order to serve most of the accesses and remove these accesses from the global memory. Locality is as important for achieving high-performance in multi-core CPUs as in many-thread GPUs. The concept of locality is also talked about in The CUDA Parallel Programming Model - 5. Memory Coalescing