In this post, I talk about what happens when blocks are assigned to SMs, as well as CUDA code optimization across GPU architecture. Before this, I thought it was necessary to recap how CUDA’s virtual architecure maps to the physical and vice-versa.

CUDA-capable GPU cards are composed of one or more Streaming Multiprocessors (SMs), which are an abstraction of the underlying hardware.

Each SM has a set of Streaming Processors (SPs), also called CUDA cores, which share a cache of shared memory that is faster than the GPU’s global memory but that can only be accessed by the threads running on the SPs the that SM. These streaming processors are the “cores” that execute instructions.

The numbers of SPs/cores in an SM and the number of SMs depend on your device.

It is important to realize, however, that regardless of GPU model, there are many more CUDA cores in a GPU than in a typical multicore CPU: hundreds or thousands more. For example, the Kepler Streaming Multiprocessor design, dubbed SMX, contains 192 single-precision CUDA cores, 64 double-precision units, 32 special function units, and 32 load/store units.

Depending on the model of GPU, the cores may be double or quadruple pumped so that they execute one instruction on two or four threads in as many clock cycles.

For instance, Tesla devices use a group of 8 quadpumped cores to execute a single warp. If there are less than 32 threads scheduled in the warp, it will still take as long to execute the instructions.

All CUDA cards to date use a warp size of 32.

Each SM has at least one warp scheduler, which is responsible for executing 32 threads.

The programmer is responsible for ensuring that the threads are being assigned efficiently for code that is designed to run on the GPU. The assignment of threads is done virtually in the code using what is sometimes referred to as a ‘tiling’ scheme of blocks of threads that form a grid. Programmers define a kernel function that will be executed on the CUDA card using a particular tiling scheme.

When programming in CUDA we work with blocks of threads and grids of blocks. What is the relationship between this virtual architecture and the CUDA card’s physical architecture?

When kernels are launched, each block in a grid is assigned to a Streaming Multiprocessor. This allows threads in a block to use shared memory. If a block doesn’t use the full resources of the SM then multiple blocks may be assigned at once. If all of the SMs are busy then the extra blocks will have to wait until a SM becomes free.

Once a block is assigned to an SM, it’s threads are split into warps by the warp scheduler and executed on the CUDA cores.

Due to the hugely increased number of registers, a warp’s context (it’s registers, program counter etc.) stays on chip for the life of the warp. This means there is no additional cost to switching between warps vs executing the next step of a given warp. This allows the GPU to switch to hide some of it’s memory latency by switching to a new warp while it waits for a costly read.

Part 2. Can CUDA Code Be Optimized For All GPUs?

This assumes that warp size is the same.

first, what gets built by nvcc?

Compiler produces a fat binary which includes all three types of code.

More on this at: http://on-demand.gputechconf.com/gtc/2013/webinar/cuda-toolkit-as-build-tool.pdf

When a CUDA fat binary is run on a given GPU, a few scenarios can take place:

Newer GPUs can run older PTX assembly code, but binary code from one architecture can’t fun on another.

Optimizations can be applied at various levels

Now coming back to the question, we can try to answer from device features perspective. For instance, we don’t know beforehand:

Shared memory benefits meny problems, but it’s not appropriate for all problems. 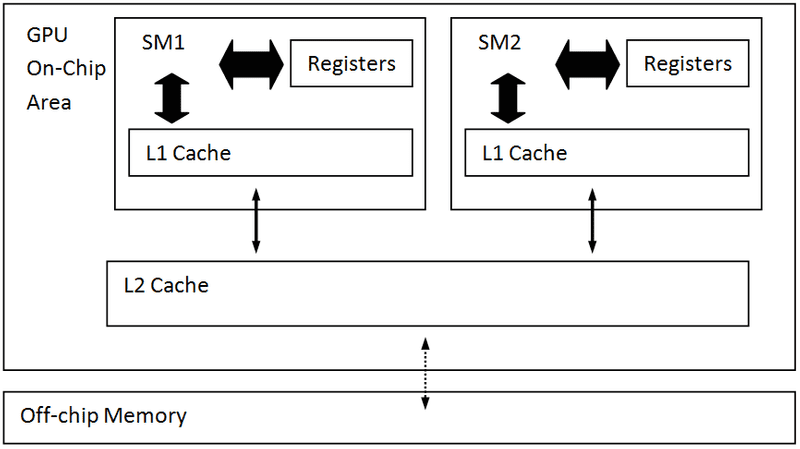 another picture showing the same architecture. 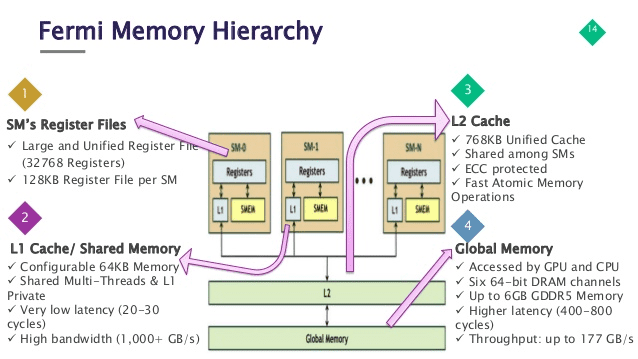 “Local” because each thread has its own private area

It could hurt performance in two ways:

Traditional GPU architectures support a read-only “load” path for texture operations and a write-only “export” path for pixel data output, which is poorly suited to executing general purpose C or C++ thread programs that expect reads and writes to be ordered. For example: spilling a register operand to memory and then reading it back creats a read after write hazard.

This challenge is addressed by a single unified memory request path for loads and stores, with an L1 cache per SM multiprocessor and unified L2 cache that services all operations.

L1 cache is per-SM. It’s configurable to support both shared memory and caching of local and global memory operations.

This unified design allows the L1 cache to leverage resources, increasing its bandwidth, and allows it to be reconfigured to grow larger when shared memory allocations are not using all of the shared memory capacity.

Furthermore, a configurable L1 cache can be as large as 64KB in size, combined with a 32KB per SM shared memory allocation, or it can be reduced to 32KB of L1 cache, allowing 64KB of allocation to be used for shared memory.