This series contains my note taken from What Every Programmer Should Know About Memory.

Deal with slowness of mass storage with software techniques:

However, it’s been very difficult to remove main memory as a bottleneck and solutions require changes to the hardware:

Why not talk about specialized hardware?

Two parts of a standardized chipset:

All CPUs are connected via a common bus, Front-side bus, to the Northbridge.

To reach all other system devices, the Northbridge must communicate to the Southbridge, which is the ‘I/I bridge’ that handles communication with devices via a variety of different buses.

Consequences of the tw-bridge structure:

Bottleneck 2: bus from the Northbridge to RAM

It’s important for performance to schedule memory access in ways that minimize delays, with limited bandwidth available. Processors are much faster and must wait to access memory, despite the use of CPU caches.

Why are there different types of RAM in the same machine? More specifically, why are there both static RAM (SRAM5) and dynamic RAM (DRAM)?

static RAM is much faster and provides the same functionality. Why is not all RAM in a machine SRAM? 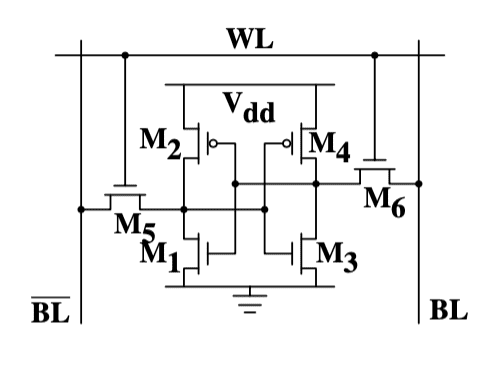 The picture above shows the structure of a 6 transistor SRAM cell. The core of this cell is formed by the four transistors M1 to M4 which form two cross-coupled inverters. They have two stable states, representing 0 and 1 respectively. The state is stable as long as power on Vdd is available.

It’s important to note that:

The structure of DRAM is much simpler, all it consists of is one transistor and one capacitor.

A dynamic RAM cell keeps its state in the capacitor C. The transistor M is used to guard the access to the state.

The use of a capacitor means that reading the cell discharges the capacitor. The procedure cannot be repeated indefinitely, the capacitor must be recharged at some point. It only takes a short time for the capacity of a fully charged capacitor to dissipate. This problem is called “leakage”.

This leakage is why a DRAM cell must be constantly refreshed. For most DRAM chips these days this refresh must happen every 64ms. During the refresh cycle no access to the memory is possible since a refresh is simply a memory read operation where the result is discarded. For some workloads this overhead might stall up to 50% of the memory accesses.

Resulting from the tiny charge is that the information read from the cell is not directly usable. The data line must be connected to a sense amplifier.

Reading a cell causes the charge of the capacitor to be depleted. This means every read operation must be followed by an operation to recharge the capacitor. This is done automatically by feeding the output of the sense amplifier back into the capacitor. It does mean, though, the reading memory content requires additional energy and, more importantly, time.

Charging and draining a capacitor is not instantaneous. The signals received by the sense amplifier are not rectangular, so a conservative estimate as to when the output of the cell is usable has to be used.

The chip real estate needed for one DRAM cell is many times smaller than that of an SRAM cell. The SRAM cells also need individual power for the transistors maintaining the state.

The structure of the DRAM cell is also simpler and more regular which means packing many of them close together on a die is simpler.

Overall, cost wins. We have to live with main memory based on DRAM.

To select the individual memory cell on the RAM chip, parts of the physical address are passed on in the form of a number of address lines.

It would be completely impractical to address memory locations individually from the memory controller: 4GB of RAM would require 232 address lines.

Using this direct approach is no big problem for chips with small capacities. But if the number of cells grows this approach is not suitable anymore. The size of a demultiplexer increases exponentially with the number of input lines when speed is not to be sacrificed.

The DRAM cells are organized in rows and columns. They could all be aligned in one row but then the DRAM chip would need a huge demultiplexer. With the array ap- proach the design can get by with one demultiplexer and one multiplexer of half the size. This is a huge saving on all fronts.