This is the second post in a series about what I learnt in my GPU class at NYU this past fall. This will be mostly about warps, why using warps from a SIMD hardware standpoint, and how warps can be a dangerous thing to deal with.

Recall that launching a CUDA kernel will generate a grid of threads organized as a two-level hierarchy.

Conceptually, threads in a block can execute in any order, just like blocks.

When an algorithm needs to execute in phases, barrier synchronizations should be used to ensure that all threads have completed a common phase before they start the next one.

But the correctness of executing a kernel should not depend on the synchrony amongst threads. 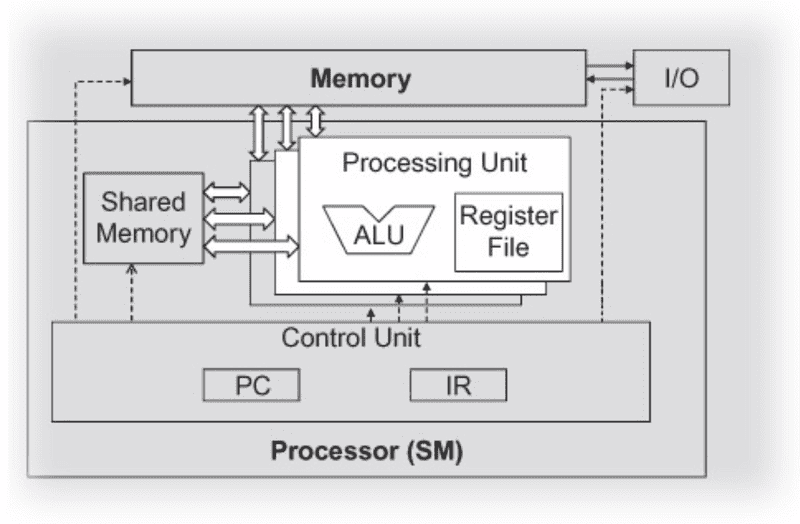 This is called Single-Instruction-Multiple-Data in processor design.

warp as an execution unit 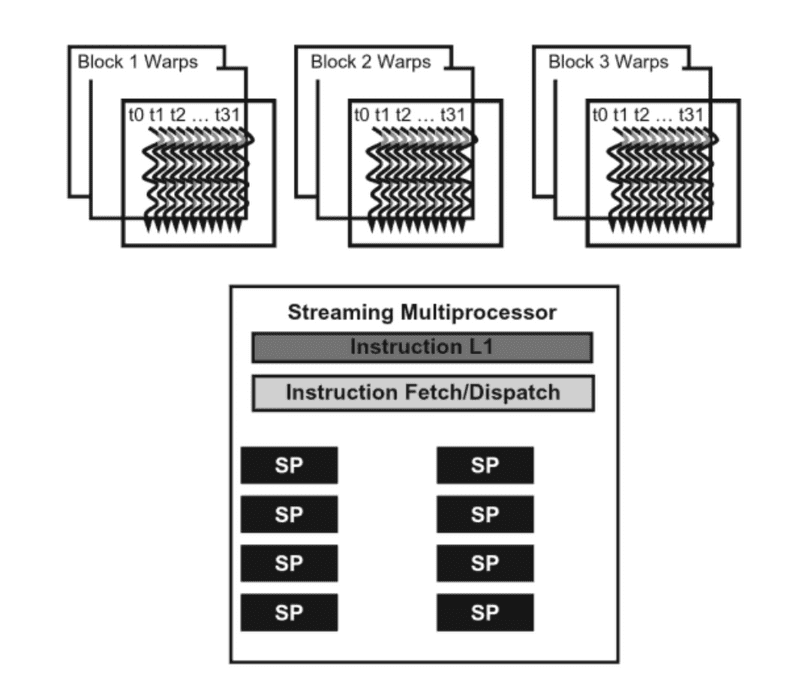 The picture also shows a number of SPs. In general:

In early GPU designs, each SM can execute only one instruction for a single warp at any given instant.

In recent designs, each SM can execute instructions for a small number of warps at any point in time.

In either cases from above, the hardware can execute instructions for a small subset of all warps in the SM. Then why do we have so many warps in an SM?

This is how CUDA processors efficiently execute long-latency operations, such as global memory accesses.

This mechanism of filling the latency time of operations with work from other threads is often called “latency tolerance” or “latency hiding” (see “Latency Tolerance” sidebar).

Warp scheduling is also used for tolerating other types of operation latencies, such as pipelined floating-point arithmetic and branch instructions. Given a sufficient number of warps, the hardware will likely find a warp to execute at any point in time, thus making full use of the execution hardware in spite of these long-latency operations.

The selection of ready warps for execution avoids introducing idle or wasted time into the execution timeline, which is referred to as zero-overhead thread scheduling. With warp scheduling, the long waiting time of warp instructions is “hidden” by executing instructions from other warps.

This ability to tolerate long-latency operations is the main reason GPUs do not dedicate nearly as much chip area to cache memories and branch prediction mechanisms as do CPUs. Thus, GPUs can dedicate more of its chip area to floating-point execution resources.

How Are Blocks Partitioned?

Based on thread indices. Thread IDs within a warp are consecutive and increasing. 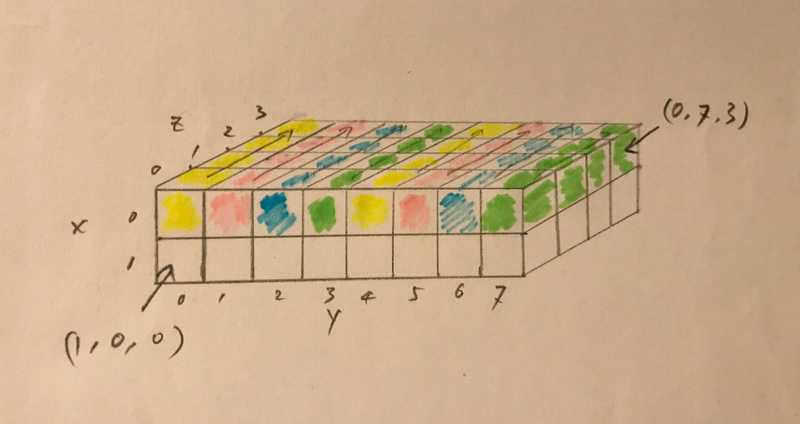 All threads of a warp are executed by the SIMD hardware as a bundle, where the same instruction is run for all threads.

Warp is the unit of thread scheduling in SMs.

when is it good?

When all threads within a warp follow the same control flow.

For example, for an if-else construct, the execution works well when either all threads execute the if part or all execute the else part.

when is it bad?

When threads within a warp take different control flow paths, the SIMD hardware will take multiple passes through these divergent paths. During each pass, the threads that follow the other path are not allowed to take effect.

These passes are sequential to each other, thus they will add to the execution time.

If threads in a warp execute a for loop that can iterate six, seven, or eight times for different threads:

In terms of source statements, a control construct can result in thread divergence when its decision condition is based on threadIdx values.

For example, the statement if (threadIdx.x. > 2) {} causes the threads to follow two divergent control flow paths. Threads 0, 1, and 2 follow a different path than threads 3, 4, 5, etc.

Similarly, a loop can cause thread divergence if its loop condition is based on thread index values.